With my grandfather Ion Iordache and my father Constantin Iordache in 1981.

I was born in 1967 in Bucharest, Romania. I began playing saxophone in the early 90's, having been fascinated with sound since childhood. (For example, I had invented the tape loop at 13, unaware that it had already been done). My first influences were Charlie Parker, Lee Konitz and Ornette Coleman. My first instrument was a recorder (I wanted a flute but could not afford it).

Between 1987 and 1990 I studied improvisation with the late great pianist and composer Marius Popp at the Popular School for the Arts in Bucharest, and in the early 90's I briefly studied saxophone with Garbis Dedeian, who was Romania's most esteemed saxophone player at the time. Jamming with saxophonist Garbis Dedeian (who would later become my teacher) and trumpet player Marian Cucu at the Jazz Festival in Costinesti (1985).

My first break was playing a solo on a song by rock group Timpuri Noi. Afterwards I played with other jazz and rock musicians and bands throughout the 90's, including pianist Harry Tavitian - with whom I recorded two albums, Axis Mundi and Balcaz - pianist Lucian Ban - before his departure for New York - guitarist Sorin Romanescu, bassist Vlaicu Golcea, trombonist Tom Smith and singer Marta Hristea, notably on the live album "11" by East Village Open Formula. Since 2003 I have been leading his own band, Iordache, initially inspired by the Sun Ra Arkestra. I also took "Iordache" as a stage name, to create confusion. A visit from the Dero Foam during a corporate event in Bucharest. 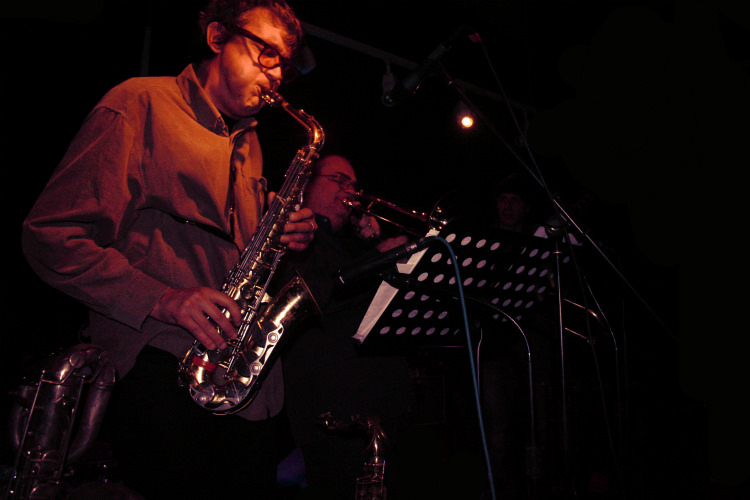 With Tom Smith and Iordache, during a concert in Bucharest (photo by Medicine Madison).

The band's second line-up included bassist Uţu Pascu and drummer Tavi Scurtu, the funkiest rhythm section to be found this side of the Atlantic, Sorin Romanescu and Eugen Nuţescu - an unrepentant rocker, from Kumm - on guitars.

Sadly, no recordings of this band survive (Dissipatin' was recorded with a transitional band, still with Vlaicu Golcea on bass and Vadim Tichişan on drums, and featuring guests such as saxophonist Cristian Soleanu, keyboardist Raul Kusak and singer Marta Hristea). All these musicians were living in Timişoara, where we had recorded One Life left, so keeping the band functional became increasingly difficult because of the distance and conflicting time schedules, so Petre and Lucian were shortly replaced by Sebastian Burneci, a powerful yet sensitive trumpet player, and wonderful, melodious trombonist Florian Radu, both from Bucharest. Titan, the neighborhood I grew up in, photographed by my father in the '70s. With Dan Mitrofan, Toni Kuhn, Lucian Nagy and Tavi Scurtu at the recording session for "One Life Left" (photo by Alice Nacu).

The band plays my original music, which I describe as free jazz funk, where compositions and improvisations are governed by the rules of chance.

This does not mean I play whatever crosses my mind, though I also do that sometimes. But I seldom set up to write something in a particular style or with a particular chord progression. Instead, I try to pay attention to melodies that accidentally cross my mind, and try to remember them. I sing a lot into my telephone, and every once in a while I listen to these recordings and sometimes I find the seeds of a tune. I also tend to start with rhythmic ideas.

I am fascinated by polyrhythms, as they occur in Afro-Cuban music, and would like to explore them more in the future. Sometimes I also use shifting time signatures. For example, my tune Suriname, basically in 5/4, shifts towards its end to 4/4, where the new quarter note equals two and a half quarter notes from the original 5/4 bar. Like this: ♩ = ♩ ♩. (imagine a legato sign under the last two notes). I always had the chance to play and record with great musicians, who understood and respected what I am doing. I will only mention Harry Tavitian, who hired me in his band at 18, Lucian Ban, who taught me about leading a band, Vlaicu Golcea, who produced Dissipatin’, Uţu Pascu, who made me understand music is one great continuum and limits are artificial, Tavi Scurtu, a master of rhythm, Sorin Romanescu, whose comping deftly justifies any wrong notes I play, and Dan Mitrofan, who always gives me a fresh perspective of my own songs.

I am also very preoccupied with ecology, and I think we should do whatever we can to stop corporations from poisoning our planet for their profit. Playing a solo with Kumm in 2012 (photo by Romaniţa Oprea).

I also play saxophone, flute and tambourine with indie rock band Kumm, since 2003.